Che in the Congo 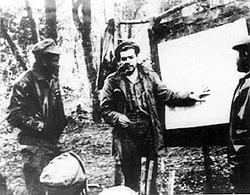 In early 1965 Che traveled to the Congo to give his input and help lead a churning revolution in the African country.  An experienced leader and an expert in guerrilla war tactics, Guevara traveled to the troubled Congo under the alias Ramon Benitez.  (I)  Che had to travel under a false name in order to evade the impending disaster that was his capture.  Despite his short life, Che had made numerous enemies including the United States who were searching for el Che because of the undeniable atrocities he committed while acting as supreme prosecutor in Cuba.  Despite his reputation, the target upon his head, and warnings from his acquaintances*, the influential, bearded man from Argentina decided to aid yet another revolution in the Congo.

Despite the efforts of Guevara and his followers, the Marxist Simba movement during the Congo crisis was rather short lived.  Due in part to foregin intervention, particularly by the United States, the morale and willpower of the Simba fighters had completely diminished.  (III)  Embarrassed and defeated, Guevara was forced to leave the Congo.  He had turned against his most popular principles of fighting to the death for what you believe is right and selflessness.  Later, when describing his venture in the congo, Guevara said,  "This is a history of a failure."  (IV)

*Che's associate from Egypt, President Gamal Abdel Nasser warned Che to dismiss the idea of going to Congo because of the improbability of success it represented.  (II)
Next page