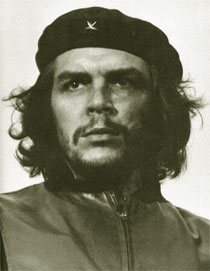 Anti-Capitalist Che Guevara
Ernesto "Che" Guevara was famous for his anti-capitalist beliefs.  The above quote is one of many things that Che had said against capitalism during his lifetime.

Che believed that followers of capitalism were blinded by the "seemingly infinite horizon" that they believe is in front of them, thinking nothing could go wrong.(II)  In a letter to an editor in Uruguay, Che states, "In capitalist society individuals are controlled by a pitiless law usually beyond their comprehension."(III)  He did not blame the people of a capitalist society for following the economic system of capitalism, but rather the leaders of the capitalist society.  In his eyes, the leaders were only propagandists that make capitalism out to be better than what it truly is.(IV)  He says that the propagandists are liars in how they show capitalism because they would leave the images of poverty and suffering that a capitalist society brought to some people in it.(V)  Che preached his anti-capitalist beliefs everywhere he could.  He did it in the letter to the editor in Uruguay, and also during the Cuban Revolution.(VI)  After the victory of the Cuban Revolution, Che envisioned a formation of strictly anti-capitalist society, and wanted to make sure that Cuba did not fall into the lies he thought capitalism to be.(VII)

One of the things Che wanted most in his life was to watch capitalism fall, or destroy capitalism himself, as seen in the above quote.
Next page