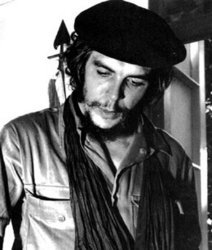 The eventual downfall of the legendary, revolutionary leader from Argentina came in Bolivia.  After admitting defeat and leaving the Congo, the general location of Guevara was unknown to the public, much to his joy.  The mercurial man went by the name Adolfo Mena Gonzalez for his new endeavors in the Congo.  (I)  In an effort to overthrow the non-socialist government, Guevara led yet another small guerrilla group against the nation's army.  Unfortunately for Che and his followers in Bolivia, his small sized revolt was defeated by the Bolivian army and US forces.  Che's efforts to foment revolution failed due in part to the citizens wariness of rising against their government.  (II)  In his diary, Guevara wrote, "The peasants do not give us any help, and they are turning into informers."  (III)

The failure in Bolivia went from bad to worse, as a manhunt for Che commenced following his dismal efforts to overturn the Bolivian government.  The quote above on the nature of the civilians in Bolivia held true, as the location of Guevara was eventually given to the CIA forces in Bolivia by a anonymous civilian informant.  (IV)  Che held strong to his principles of dedication and selflessness this time around as he refused to give any information to interrogators.  (V)  This defiance and audacity eventually took the Argentine's life on October 9, 1967.